My wife and girlfriend

A Footballer Thanked His Wife And Girlfriend In Post-Match Interview

Interviews can go horribly wrong, but none of them even compare to this Ghanaian footballer who accidentally thanked the wrong person.

In 2017, Mohammed Anas was better known for his slip of the tongue in a post-match interview than playing for South African top-flight side Free State Stars.

Just check out the below clip:

After his team drew 2-2 with Ajax Cape Town, the striker was named Man of The Match. He was so chuffed, he thanked his wife when he was talking to the camera.

But he also thanked his girlfriend.

Did he just admit he's cheating on his wife live on TV? Anas' speech is going to go down in history as the best thank you speech ever post-match.

And by best, I mean worst.

Anas got the Man of the Match because he scored twice on the pitch, but we had no idea that he'd scored twice off-pitch, too. It brings a new meaning to the term 'player'.

But he quickly denied his own claims, and explained that he calls his daughter 'girlfriend'.

"My family knows that I call my daughter my girlfriend. That's what I was talking about. I don't have a girlfriend," he told The BBC.

Anas was full of love and affection for his wife. "I love her so much. She's given me two beautiful children. She is fine. She knows what kind of man I am so I am not worried.

"I'm famous now - people around the world know me."

When it comes to TV and radio, it's so easy to mess up.

The important thing is that you recover quickly and move on. Anas realised immediately what he had said and tried to backtrack - although unsuccessfully.

Mohammed Anas: 'I call my daughter my girlfriend'

Mohammed Anas appeared to dig himself into an even bigger hole when he said he was talking about his daughter in the now legendary interview.
"My family knows that I call my daughter my girlfriend. That's what I was talking about. I don't have a girlfriend," the Ghanaian striker said.
Anas who plays for South African team 'Free State Stars,' was named 'man of the match' after scoring two goals in the Star's draw against Ajax Cape Town.
His post-match interview started innocuously enough when he thanked God and his fans, but things took a decidedly awkward turn when he suddenly blurted out: "Thank you for this, I appreciate my fans. My wife and girlfriend...I mean my wife, sorry to say," he quickly added.
Viewers squirmed as Anas realized his blunder and started groveling to his wife: "I'm so sorry...I love you so much, I love you so much from my heart!"
Anas has now spoken out and said he has nothing to worry about from his wife of seven years.
"I love her so much. She's given me two beautiful children. She is fine. She knows what kind of man I am so I am not worried," he told the BBC.
"I'm famous now - people around the world know me," the footballer added.
Quite... but for all the wrong reasons...
Sours: https://www.cnn.com/2017/03/20/africa/ghana-footballer-wife-girlfriend/index.html

Ghanaian footballer Mohammed Anas has clarified his recent man-of-the-match speech thanking his 'wife and girlfriend' which made him an online sensation, insisting he was in fact referring to his daughter.

Anas capped an impressive two-goal display by scoring the most embarrassing of own goals in the live television interview afterwards, but the striker has now explained that he frequently refers to his daughter as his girlfriend.

'My family knows that I call my daughter my girlfriend. That's what I was talking about. I don't have a girlfriend,' Anas told the BBC in the aftermath of the reaction. 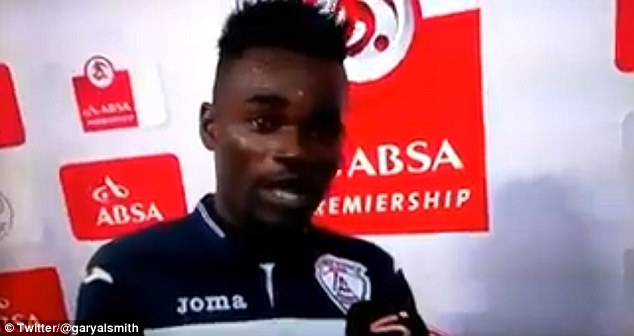 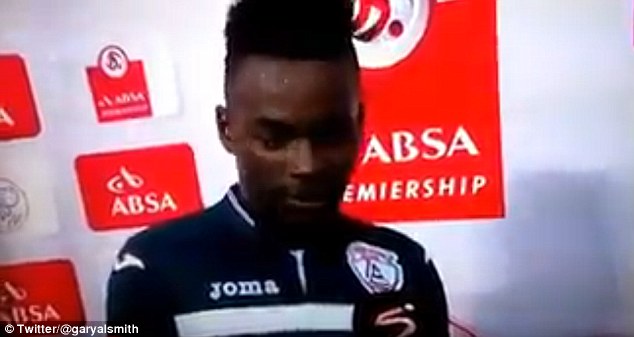 The Free State Stars player also said he wasn't worried about his wife's reaction as she understood the situation, but did reveal that the interview had made him feel like a star.

'I love her (his wife) so much. She's given me two beautiful children. She is fine. She knows what kind of man I am so I am not worried,' he added.

In the original interview itself Anas had been speaking happily following his majestic performance, perhaps getting a little carried away with proceedings. 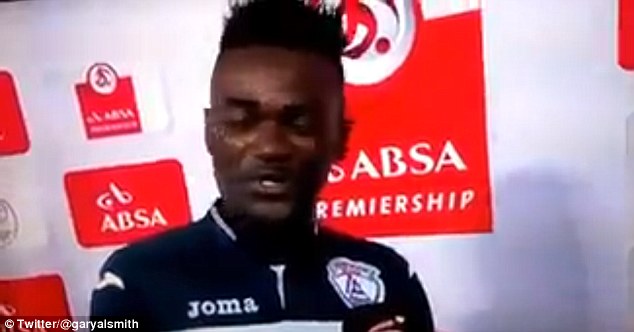 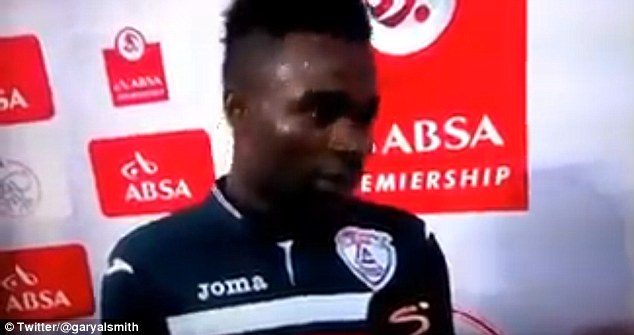 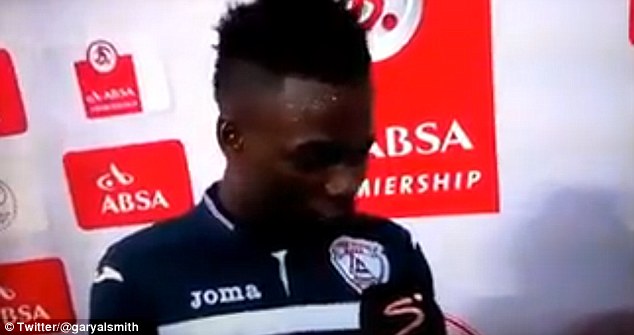 Anas said in the now notorious interview: 'And I appreciate my fans also, my wife and my girlfriend... yeah my wife. Sorry for saying that! I'm so sorry... I love you so much with all my heart!

'You must keep supporting me, thanks for coming, and there is more to come,' he said before the embarrassing interview came to an end.

The confused Anas, who plays in the South African Premier League, certainly avoided the trite responses players often give immediately after finishing a game, but the striker was extremely apologetic towards his wife after his glaring gaffe.

While such a slip of the tongue can be expected from a player not using his native language to give interviews, Twitter was unsurprisingly merciless with Anas' error going viral earlier this month.

One user wrote: 'Two goals, two girls. Mohammed Anas' while another gave him a 'vote of confidence to lead South African men'.

Free State Stars took the lead against the run of play in the 18th minute when Anas fired an unstoppable shot which beat Ajax goalkeeper Jody February.

After Rodrick Kabwe and Mark Mayambela netted for Ajax Cape Town, it was Anas who tapped in the equaliser to move them up to 13th in the table, while Ajax Cape Town remained 12th.

The comments below have not been moderated.

The views expressed in the contents above are those of our users and do not necessarily reflect the views of MailOnline.

We are no longer accepting comments on this article.

Mohammed Anas has revealed that he was in fact thanking his daughter, and not his girlfriend, following a mix-up in a post-match interview.

The 22-year-old, who plays for South African side Free State Stars, saw his video go viral after bizarrely thanking both his wife and his girlfriend, having being adjudged Man of the Match in the league clash with Ajax Cape Town.

But, rather than dwell on the embarrassing slip of the tongue, Anas made a joke of the attention he has received.

"I'm famous now - people around the world know me," Anas explained, as reported by The Mirror. "My family knows that I call my daughter my girlfriend. That's what I was talking about. I don't have a girlfriend.

"I love her so much. She's given me two beautiful children.

"She is fine. She knows what kind of man I am so I am not worried."

Ozil out of England game

In his now famous speech, Anas said: "Thank you very much for giving me this. And I appreciate my fans, also my wife and my girlfriend... I mean my wife, sorry to say. I'm sorry, my wife."

The video has reportedly clocked up over 250,000 views on YouTube as well as other social media sites.

Wife girlfriend my and

This is the first. And then. - Then what. - Aunt Sarah said that then such excitement surged through that she finished like a cat.

I gave the pelvis forward, driving a member into an open mouth. Rom pressed his lips together and tightened his tongue. I fucked him in the mouth with sweeping movements, putting my head on the penis with my hands. Then he pulled him to his feet with force and clung to his lips with a kiss.