CAP units around the nation are actively supporting local, state and federal agencies in the fight against COVID-19. Join today and serve your community in a meaningful way.

The COVID-19 pandemic may alter how we learn, but it doesn't need to limit how much we learn. CAP's STEM education curriculum blends seamlessly in distance learning applications. Contact us today.

CAP’s national network of volunteers' ability to serve the nation depends on your generous support. Join today or donate now to be part of the COVID-19 relief effort.

CAP youth development programs instill a sense of volunteerism, character and leadership that pays dividends for a lifetime of community involvement.

You Can Save Lives and Shape Futures 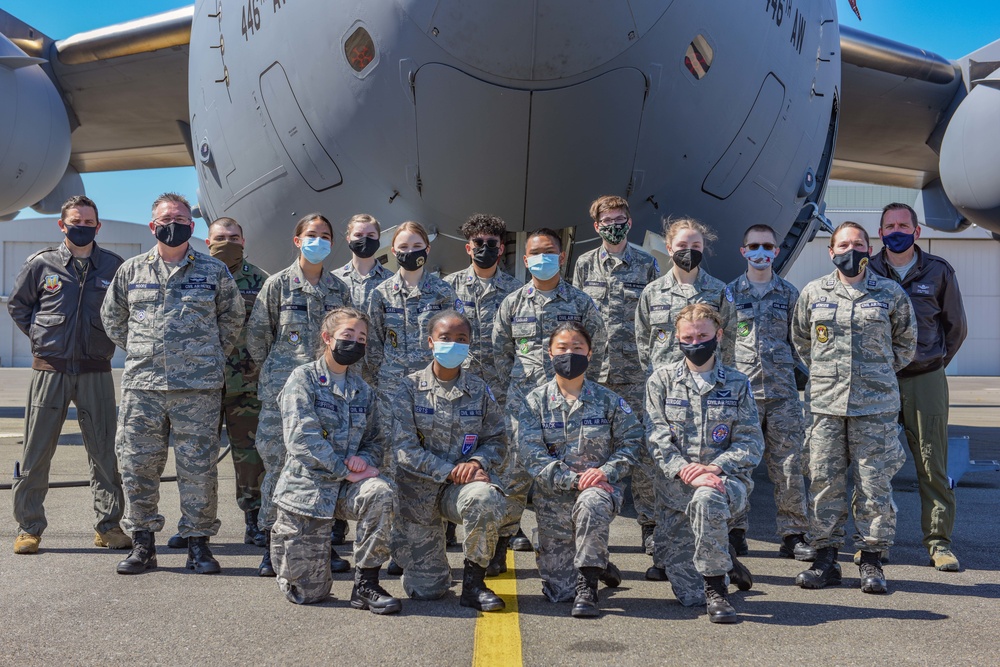 Washington State Civil Air Patrol cadets pose for a group photo in front of a C-17 Globemaster III at Joint Base Lewis-McChord, Washington, April 15, 2021. The cadets toured different units at JBLM and learned how everything works together to support a united mission. (U.S. Air Force photo by Charles Casner)

Signup for our next open house to learn more about our program.

Serving the local community since 1995, We are a full three-mission squadron and serve all three CAP missions: Emergency Services, Aerospace Education, and Cadet Programs.

Overlake prides itself on training and mentoring outstanding young leaders, effective team-players, and selfless citizens. Each year, Overlake members provide thousands of hours of community service in the Seattle Eastside area. In return for their hard work and dedication, exciting and one-of-a-kind opportunities in leadership, aerospace, travel, and flight are opened to them.

Civil Air Patrol is a non-profit volunteer organization formed in 1941. Currently comprised of over 55,000 members, CAP is congressionally chartered as the civilian auxiliary of the United States Air Force. It maintains a fleet of over 550 single-engine aircraft, which are used for search and rescue, disaster relief, cadet flight training, and tasks. The three missions which Congress has tasked Civil Air Patrol with are cadet programs, aerospace education, and emergency services.

LINKS OR REFERENCES TO INDIVIDUALS OR COMPANIES DOES NOT CONSTITUTE AN ENDORSEMENT OF ANY INFORMATION, PRODUCT OR SERVICE YOU MAY RECEIVE FROM SUCH SOURCES.

Locally, Washington Wing Civil Air Patrol members operate a fleet of 23 vehicles and 14 aircraft (Cessnas 172s, 182s, and a 206, as well as 2 Blanik gliders) for inland search and rescue missions and cadet orientation flight instruction. Washington members contributed a value of $4.9 million in volunteer hours to their local communities and the state of Washington in 2016. In April 2018, Washington Wing installed the first female to reach the grade of Colonel, Shelly J. Norman [6] as Wing Commander in a change of command ceremony in Wenatchee, Washington.[7]

The Washington Wing performs the three missions of the Civil Air Patrol: providing emergency services; offering cadet programs for youth; and providing aerospace education for both CAP members and the general public.[9]

In March 2021, as a part of Civil Air Patrol's response in combating the COVID-19 pandemic, members of Washington Wing provided support at three vaccine point of distribution.[11]

The Civil Air Patrol offers aerospace education for CAP members and the general public, including providing training to the members of CAP, and offering workshops for youth throughout the nation through schools and public aviation events.[13]

We are an active squadron with opportunities for cadets and senior officers to learn, achieve, and serve our local community.

The Five Traits of Cadet life:

youth development, and promotion of air, space, and cyber power.

NOTE: LINKS OR REFERENCES TO INDIVIDUALS OR COMPANIES DOES NOT CONSTITUTE AN ENDORSEMENT OF ANY INFORMATION, PRODUCT OR SERVICE YOU MAY RECEIVE FROM SUCH SOURCES. Warning: The information you are receiving is protected from interception or disclosure. Any person who intentionally distributes, reproduces or discloses its contents is subject to the penalties set forth in 18 United States Code Section 2511 and/or related state and federal laws of the United States.

He finally decided. - If your mother is at work, then you can't hang around, and if at home. you still have to go back. Are you with me or have you changed your mind. - Lech, who are you holding me for.

Restaurants that deliver themselves

My angel in korean