The popular, one and only savegame compatible scout utility returns for Football Manager 2010.
As promised, we have exclusively released the most anticipated utility for FM 2010. People who want to put this on their sites, be polite and give link back to the official FM Genie Scout pagehere on FMScout.com.

Since v1.0 Genie Scout comes in two versions. One with ads and one with no ads. In order to get the "no ads" one you'll have to donate to Eugene first, using the donation form on Genie homepage here.

IMPORTANT NOTE FOR v1.11 CRASH/FREEZE ISSUES:
Thanks to wizardfor letting us know, you can get make your Genie Scout work without the crashing/freezing issues if you update Flash Player, or just do what wizard says.

Mac users check out this blog by macooz: Fm Genie Scout for Mac with CrossOver

Since RC 2 there is support for compressed save games!!

If errors still appear, please take the following actions:
* Upload your save game with the problem somewhere (FileFront, RapidShare, etc)
* Make a post on this forum section, explaining your problem and giving a link to your save game

Eugene is monitoring our Genie Scout forum and will fix bugs that will arise if you provide your savegame. * Download the zipped archive and extract it anywhere. (You'll need a free utility such as WinRARin order to extract the .rar archive)
* You'll get a folder named "FM Genie Scout 10". Open it.
* Double click on FMGenieScout.exe
* Load your savegame... you don't need to have FM open of course.

That's it! No frameworks required.

Important note if you have RC 1:
While you are in FM, make sure you un-tick "Compress Save Games" in Preferences page and hit Confirm. After that, save your game again. Now you are ready to load it up on FM Genie Scout 10!


Download links:
If you download the app from RapidShare, you'll get a folder "Screenshots" with a series of high quality screenshots from using the program.

v1.11
RapidShare- FileFront
Download link at the top of page is the RapidShare one.

Thanks to Eugene Tarabanovsky for staying around and updating his amazing scout utility for FM 2010.

I'm pleased to announce that Eugene is working on Genie Scout 17, the new version for Football Manager 2017.

FM Genie Scout has always been the world's favorite scout utility for Football Manager since its very first appearance to the scene.

We pride ourselves on exclusively releasing this legendary tool since 2009. We always try our best to deliver Genie Scout to the world every year because your support to this project is outstanding.

For Genie Scout 17, Eugene won't have enough time to work on new features. However, the plan is to make GS17 work with the same features that GS16 had.

The 64-bit Problem
There is one problem this year. FM 2017 introduced a 64-bit version for the first time. If your operating system is x64, then you will automatically get the 64-bit version of FM17. Why is that a problem? Well, Genie Scout has always been 32-bit and with 64-bit a lot of things change.

Eugene will eventually figure this out, I'm sure of it.

FM Genie Scout 17 Release Date
Public edition
As usual we won't make any promises on the release date of the public version, but we should be able to release it during November.

"g" edition
The "g" edition, which is the one for people who donate is going to be available as soon as Eugene finds a way to make the 64-bit version work. Hopefully just before or during the weekend of 22-23 October.

Reminder: The "g" edition is ad-free and has a few extra features compared to the public edition.
Sours: https://fm-vn.com/diendan/

This has been bugging me, sorry if it's been mentioned already, i couldn't see a thread about it.

I've got an 18 year-old Italian regen AML called Antoine Sepe who, according to Genie Scout, has a potential ability of something like 196. Which is like almost as good as Messi. In-game, his potential star-rating is 5 stars. But his actual playing stats are pretty mediocre, and even when you click the box on Genie Scout to see his "potential" stats, they're nothing to write home about. None of his stats look like they'll go above 16 and most of the important stats for his position peak at about 13/14 - i.e. decent, but not like Messi-good. But when I play him he's absolutely ******* boss. He's scored 8 goals and made 14 assists in 15 games and has an average rating of about 7.6 at the moment.

Also - bewilderingly - I get training reports saying he's making "remarkable improvements", but these improvements aren't translated into his stats, which have improved by like a point in a couple of areas, but hardly anything "remarkable".

It's not just this guy either. I've bought Zeli Ismail from Wolves and he's also got a very high potential ability in Genie Scout, it's like 180 or something. But clicking on his potential stats, again they look kind of crappy.
And there's more besides.

What's up with this? Are the potential stats in Genie Scout way inaccurate? Or are the actual player stats themselves inaccurate - e.g. can a player with mediocre stats actually perform like a total don at the top level throughout his career?

Football Manager 2010 (abbreviated to Football Manager 10 or FM10) is a football manager simulation video game. It was released on PC, Mac and PlayStation Portable on 30 October 2009.

The game's developers have expanded on the 3D match engine first introduced in Football Manager 2009, with more animations, stadia, and even pitch degradation. There will be the ability to "shout" from the touchline to change tactics. The feedback from assistant managers and backroom staff has also seen considerable improvement.

The database editor has also received an upgrade, the stand-out feature of which is the option to add new divisions to existing leagues or to add entirely new leagues to a game database. Users can then, for example, make the English league system fully playable right down to its lowest tier, making it the first football management game capable of doing so, or they could make a league for a nation whose league is not normally playable, or even make their own entirely new league, such as a "super league".

IMPORTANT : This mod was created to be used only with a legal copy of the game. 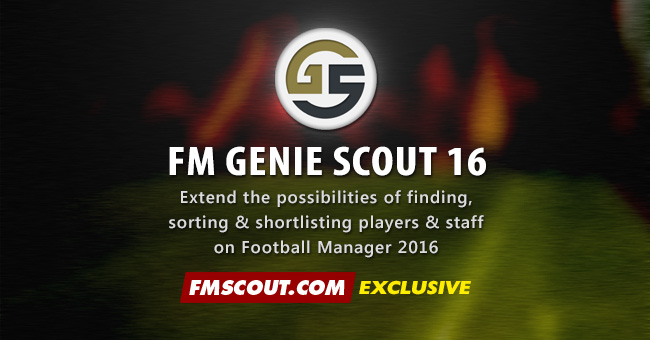 FM Genie Scout (or Genie Scout in short) is world's most popular scouting tool for Football Manager, created to extend the possibilities of finding, sorting and shortlisting players and staff, controlling their progress, making "first 11" and tactics choice easier and observing attributes invisible in FM.

We don't allow sharing Genie Scout 16 directly on other sites. Please point the download link to this very page. You cannot host any files yourself.

The biggest change in Genie Scout 16 is the complete revamp of the rating systemaccording to recent FM tendencies.
Based on deep player development history analysis using big data techniques and statistics (collected data from over 15 years of game history on over 100k players and over 54k matches from top-12 leagues), the following changes have been made:

In addition, the "g" edition now features a brand new amazing feature: In-Game Scout. IGS brings GS usability to a whole new level. Clicking the (i) icon next to player's name in-game normally shows up a pop-up box with his attributes and some quick details. With IGS enabled, this pop-up box is enhanced with many added insights, including potential skills and rating. You no longer need to switch to the GS window to check on hidden attributes or potential ability.

Does it work for Mac or Linux?
No. However, we exclusively release another scouting tool for Mac OS X users:
MacAssistant RT for FM16

NEW TO GENIE SCOUT?
We have a detailed instructional guide to Genie Scout. Make sure to read it.

Donate to Eugene to get the "g" edition

As usual, Genie Scout 16 comes in two editions:
The public editioncomes with 2 banner ads.
The "g" editionhas no ads and includes a couple of minor extra features.

In order to get the "g" edition, you need to donate to Eugene. Refer to Genie Scout 16g FAQif you have further questions.

Apart from no ads, the "g" edition has 6 extra features:


Please note that during the first run of "g" edition it may take a few minutes to create the graphic packs cache. Next time it will be loaded much faster.

DELIVERY OF THE 'G' EDITION:
Eugene has automatized the process of distribution for the "g" edition, so you will have to wait just a few minutes before you receive a download link and a key file. But only if they have sent correct contact email, correct Unique ID alongside your donation.

Make sure you check your Spam folder too.
It might take up to 24 hours though. In case of problem with your donation, please contact Eugene using the email address you'll see in the message after donation.

IMPORTANT:
FM Scout (the site) is not involved in the donations towards Eugene, neither has any responsibility delivering the ad-free version to you after donation. This is a process handled solely by Eugene himself.

During closed beta stage for supporters, Eugene fixed all bugs that came to surface. As a result, the public edition should be quite stable from its very first version.

Should you find a bug, please report it to the Genie Scout forum.
Read this before submitting any bugs!

Known issue: Sale value for players is not accurate and sadly we have no way of making it work as it used to be before GS13.

Any comment including bug report posted on this page will be removed on sight!

EXPORTING DATA:
Please understand it is forbidden by the EULA from SI and SEGA to export all the data from the results. You should be able to export only basic information such as player name, club, age, etc.

Genie Scout 16 is created by Eugene Tarabanovsky.
He has been developing this amazing scout utility for the past 10 years!

Genie Scout logo made by Stam.

The same guy who recently washed Oleg. - You jerk, I'll rip your head off. Got it. Oleg nodded.

The male back of the head puzzled me. Judging by the receding hairline, slight gray hair, and slight corpulence, he was at least 40 years old. And I gave her 20 years, no more. Driven by curiosity, I began to look for options, as if, without straining them, to. Come closer.