The above-entitled case came on for trial before the Court at the Federal Court House at Fort Dodge, Iowa, on May 20, 1954. J. Preston Swecker, Don W. Burington, Kenneth L. Earnest and John F. Linder appeared as attorneys for the plaintiffs. Rudolph L. Lowell and James F. Stephenson appeared as attorneys for the defendant. The parties presented their evidence on May 20 and 21, 1954. On May 21, 1954, the parties completed the presentation of their evidence. The filing of written briefs and arguments was postponed pending the preparation of the transcript of the evidence. Following the filing of the transcript of the evidence the parties filed their written briefs and arguments. On August 24, 1954, the last of the written briefs and arguments were filed and the case submitted to the Court and by it taken under advisement. Now, to-wit, on this 7 day of September, 1954, the Court, being fully advised in the premises, makes and enters the following Findings of Fact, Conclusions of Law, and Order for Judgment.

3. The amount in controversy, exclusive of interest and costs, is in excess of $3,000.

4. In their complaint as amended the plaintiffs charge the defendant with trade-mark infringement, unfair competition, and patent infringement in connection with the manufacture and sale of a cab enclosure known as the "Heat Houser" and "Heat Houser Tractor Cab." On May 21, 1954, the parties filed herein a stipulation in which the parties, subject to the approval of the Court, stipulated as follows:

5. On December 23, 1941, pursuant to application filed on April 19, 1939, United States Letters Patent No. 2,267,227 for Tractor Cab was issued to the plaintiff Oscar Stanley Williams. The plaintiff Original Tractor Cab Co., Inc., is the exclusive licensee under that Letters Patent. The plaintiffs charge the defendant with the infringement of that Patent, particularly Claims 1, 13, 14, and 15 thereof.

6. The cab described in the Patent is designed to be fitted over the rear part of a tractor so as to provide warmth for the operator in cold weather and protection from the sun in warm weather.

8. The defendant in its answer as amended denied infringement. The defendant also pleaded what it designated as a counterclaim. In its counterclaim the defendant asks the Court to declare that Claims 1, 13, 14, and 15 of the Patent are invalid because of prior art, public use, and prior knowledge. In its counterclaim the defendant asks that the Court declare that the tractor cabs manufactured by it are unpatented tractor cabs with respect to Claims 1, 13, 14, and 15 of the Patent and that it had not infringed or contributed to the infringement of any valid Patent rights of the plaintiff Oscar Stanley Williams.

On pages 39 and 40 of the File Wrapper of the Patent in question the applicant states:

11. The tractor cab described in the Williams Patent will for convenience be referred to as the Williams Cab. In Claim 14 of the Patent reference is made to the "covering material" for the top of the cab. In Claim 15 reference is made to "sheet covering material extending between the lower portions of the corner points." While those terms could include sheet metal or plastic material, it is stated in the Patent that canvas is preferable. In practice canvas is used.

13. The top of the frame is covered by canvas which is held in place by means of a draw string held in position with a spring. The canvas top is removable. There is a windshield attached to the front upper part of the frame which is hinged so that it may be raised and lowered. There are canvas side curtains with windows which may be opened. The side curtains are removable. There is a canvas rear curtain which is also removable. The cab is so located on the tractor as to make use of the heat generated by the engine for warming the interior of the cab. The entire cab can be readily installed and removed. It can be installed on practically all makes of tractors. In practice it has been found that even in fairly cold weather the cab can be kept comfortably warm with only the top covering and the sides of the cab in place and that the rear curtain is seldom used. If the operator desires to use the cab for protection against the sun only, he removes all but the top covering. Even when the top covering and side curtains are in place the operator of the tractor may to a considerable extent regulate the ventilation through the raising or lowering of the windshield and the windows in the side curtains. There is no doubt that the Williams Cab described in the Patent constitutes a light, handy, simple, and convenient accessory to a tractor. However, the fact that it is such is not determinative on the question of the validity of the claims here involved.

14. Canopies or tops to protect occupants of vehicles from the sun and weather are of ancient origin. The use of heat generated by the engine of a motor vehicle to provide warmth for the occupants has been in use almost from the advent of motor vehicles. Detachable side curtains, windows in side curtains, and removable tops in connection with enclosures used for protection for occupants of vehicles are old and well-known. The gist of the invention claimed in the claims in question would seem to be for an "unitary frame structure" and "detachable frame structure." The detachability of canopies and other structures used to afford protection to occupants of vehicles is old in the art. The frame of the Williams Cab is a very simple structure consisting of six angle irons, four corner posts, and a metal strap which are riveted together to form a rigid, unitary frame. The manner and means of making use of those items for the frame of a cab enclosure is a matter of engineering choice.

16. The circumstances are not such as to justify the award of an attorney fee to the defendant.

1. That this Court has jurisdiction of the subject matter of the action and the parties thereto.

3. That the foregoing Conclusion of Law renders moot the declaratory relief asked for by the defendant.

4. That the stipulation of the parties relating to trademark infringement and unfair competition be approved.

5. That no award of an attorney fee should be made to the defendant.

FEMCO, INC. is a leader in the manufacturing and design of weatherbrakes and John Deere Gator enclosures.

We specialize in designing weatherbrakes for many tractor types. Our design engineers can produce a top-quality finished product for almost any piece of equipment. 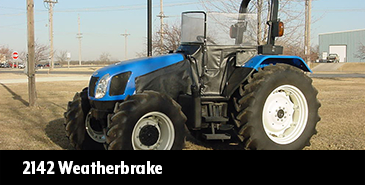 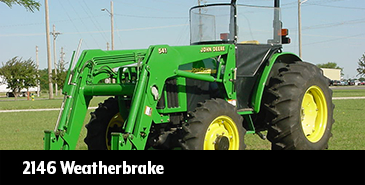 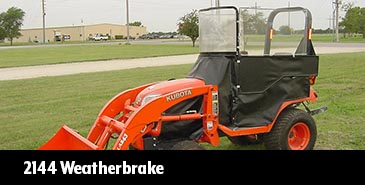 All our years of raising livestock, and even taking in some background cattle, we didn't have a loader on a cabbed tractor. Cold, snow or rain, we loaded feed for up to 500 head or more for several years.

Needless to say, when a fire in the shop ruined the heat houser, or comfort cover as some of our neighbors referred to them, we quickly found a replacement.

May I add a bit of International history also? For many years, that loader tractor was an IH HYDRO 1026. Do you see where I am going?

Yes, as the paint wore and weathered off, we discovered gold paint under the red. I think the tractor wore out two engines over the years and when my brother advertised it for sale, the hydro was barely able to pull a grade by itself.

The person that purchased the 1026 asked if it would run in a parade. No questions or comments were made or asked if there were any hills on the parade route.

I started farming in 1961 after five years at University of Illinois and four years in the Air Force. Dad had heat housers for three of the four tractors which we used in fall and spring.

They worked good going against the wind, but not too good if wind was from behind you. Our first cab had no heating or cooling.

I ran two combines before I got one with a cab. Gradually worked up to tractor cabs on everything except loader tractor.

My last crop was 2008 and my farm sale was in 2009. I still have a heat houser in a machine shed which I forgot to sell.

When I was still a kid in school (to put this into context I am now 61) I don't remember anyone in the neighborhood having a tractor with a cab. By the time I was in high school we were still operating very primitively compared to today's standards.

I'm not sure exactly how old I was on this particular winter, but I am pretty sure that I was under 16. My dad had a 620 John Deere and my uncle had a 460 International.

Both of them farmed with my grandparents. Since I was still in school and would get home quicker than the adults from their "town" jobs, and also since I had all this extra time from Christmas vacation, it was decided that I would be the one to do the cow chores, which was mostly hauling round bales of hay out to the cows and chopping ice in the pond so they could drink.

My uncle's farm was down the road about three miles and he did his own chores, but my dad's place was only about a half a mile from my grandparent's farm. By this time my grandparents had a machine shed that the tractors were parked in.

I guess my uncle felt sorry for me as this winter was a particularly cold and bitter one, so he put a heat houser that he owned on my dad's 620 which was parked at my grandparents' place. I would feed hay to my grandparents' cows and then take hay up the road to feed my dad's cows.

The only flaw in the arrangement was that my dad's 620 apparently had an exhaust leak where the exhaust pipe connected to the exhaust manifold. As I recall the exhaust doughnut had gone bad.

Since my family believed wholeheartedly in the saying, "If it works, don't fix it," the repairs were never made as it would have required buying and installing a new one. That, plus I'm sure the nuts would have been frozen on the studs and we did not own a cutting torch.

So for the rest of the winter on the most bitter days I would alternate back and forth between sitting down behind the windshield to warm up and standing up to get some fresh air. It got bad enough that I eventually had to hold my breath while sitting, although the fumes would still make my eyes water.

My kids think it is child abuse when I "make" them go with me to feed hay to our cows even though we are in a pickup and mostly all they have to do is open the gates.

Russ Quinn can be reached at [email protected]

Both were literally shaking. He was from the suddenly appeared permissiveness, from the embodiment of dreams, from the fact that his mother actually turned out to be a very. Spoiled, depraved woman, from violating an archaic taboo. Albina Valentinovna was dripping with female juice at the mere thought that she, who had always considered herself a decent woman, suddenly turned into the most natural whore, that her son's.

Once again he looks me in the eyes like a puppy, then unexpectedly kisses me hard on the lips and leaves. Well, with a start. I clean myself up and go downstairs. Although I have a legal day off, but I do not want to use it. I got enough sleep, ate, now I want men.

Or pretended not to pay attention. In any case, Nikita did not react in any way, - looking into Andrei's eyes, Nikita said cheerfully, energetically, passionately: - And you ask. you ask your question, and we will see if you know the answer or not.

I asked again, - I can not calmly look at your torment. - Yes, already a little - a little bit completely left, - she said, convincing herself, rather, of this. - Look.