The North American Grappling Association (NAGA) are the world’s largest mixed grappling tournaments with over 700,000 competitors worldwide. On Saturday, September 18, 2021, NAGA comes to the MassMutual Center in Springfield, MA for the NAGA Springfield Grappling Championship. Come as an individual or as a team to compete. The Facebook tournament page can be found HERE. Make sure to check in to the tournament. Use hashtag #NAGASPRINGFIELD2021 so we can see your photos and videos.

In accordance with the Department of Health and Human Services (HHS) and Board of Health, the MassMutual Center will implement the City of Springfield’s Mask Mandate that all attendees to the Arena and Convention Center will be required to wear a mask for all indoor events, regardless of vaccination status, unless actively eating or drinking.

ASSUMPTION OF RISK: The Venue operates and maintains its premises to protect against the exposure of the COVID-19 virus in accordance with federal and state guidelines. As noted by government health officials, complete isolation from the virus is impossible.  Accordingly, the Venue cannot and does not promise to eliminate the risk of exposure to COVID-19 and cannot and does not promise that the Ticket Holder will not contract COVID-19. The Ticket Holder acknowledges that the Venue has informed him/her that the Venue is not risk-free, that it is possible that the Ticket Holder may contract COVID-19 during his/her presence at the Venue, and that Ticket Holder freely chooses to enter and/or reside in the Venue with awareness of the associated risks.

One unlucky man’s run in the North American Grappling Association (NAGA) tournament came to a smelly end over the weekend, after his opponent allegedly farted in his face.

MMA and Brazilian Jiu-Jitsu fans are familiar with the omoplata technique, a shoulder lock typically used for either submitting or improving position on an opponent.

But what about this one?

The above video showcases a grappling match at a recent NAGA tourney ending in the first known submission of its kind. After some minor guard play, the guy on bottom smoothly transitions to an omoplata before allegedly committing the dirty deed in the direction of his opponent’s face.

As if he were overcome by the stench of an Asgardian baby, the helpless victim’s immediate reaction is to vomit on the mat.

“He farted in my face, man,” the victim says with an incredulous look of disgust on his face.

NAGA has played host to some of the largest BJJ and submission grappling tournaments in the United States. With the ever-evolving climate in BJJ, competitors are always looking for new ways to find an edge and make opponents cry uncle.

There’s obviously no shame in the perpetrator’s game, as he stands up and never really argues against the accusations. It’s not his fault his opponent couldn’t handle it.

Perhaps more grapplers should consider scarfing down a bean burrito or two before competition after witnessing this early candidate for "Submission of the Year."

Don’t be surprised if this incident revamps the way the guard game is played.

Jordy McElroy is a featured columnist for Bleacher Report. He is also the MMA writer for Rocktagon.

Looking for general definition of NAGA? The NAGA means North American Grappling Association. We are proud to list acronym of NAGA in the largest database of abbreviations and acronyms. The following image shows one of the definitions of NAGA in English: North American Grappling Association. You can download the image file to print or send it to your friends via email, Facebook, Twitter, or TikTok. 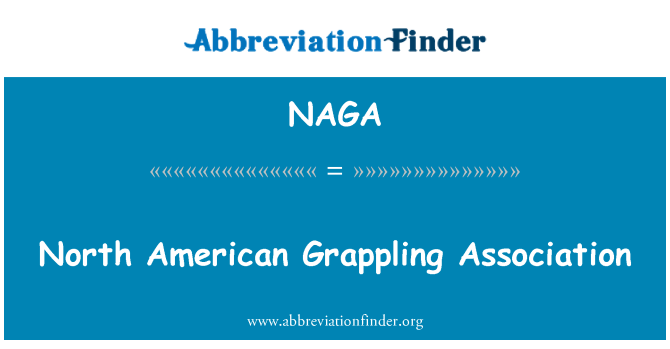 Meanings of NAGA in English

Other Meanings of NAGA

The North American Grappling Association (NAGA) is an organization started in 1995 that holds Submission Grappling and Brazilian Jiu-Jitsu tournaments throughout North America and Europe. NAGA is the largest submission grappling association in the world with over 200,000 participants world-wide, including some of the top submission grapplers and MMA fighters in the world.[1] NAGA grappling tournaments consist of gi and no-gi divisions. No-Gi competitors compete under rules drafted by NAGA. Gi competitors compete under standardized Brazilian Jiu-Jitsu rules. NAGA also promotes MMA events which they term Reality Fighting. Current champion is Marko Ančić from Croatia

Competitors in NAGA competitions are broken into weight divisions and skill levels. Skill levels are further divided into a two categories, Adults/Masters/Directors/Executives, and Children/Teens.

A lot, I lied. He walked over. He sat down. I looked at him a little dumbfounded.

Its a boy gif

Scrub vendors near me