The McDonald's Pokemon 25th anniversary Happy Meal promotion has brought along 50 cards with it, but which ones are the rarest in the set?

Seemingly out of nowhere, trading cards, especially Pokemon cards, are all the rage once again. The past few months have harkened back to a time known as Pokemania in 1999, which saw Pokemon at the height of its popularity, filling households with video games, anime, trading cards, and much more. Now, with the highest grossing media franchise in the world celebrating its 25th anniversary this year, Pokemon seems as popular as ever, most notably with collectors.

Updated July 23, 2021 by Mina Smith: TCGs have been big news again in the last year, with Magic: the Gathering cards going at auction for hundreds of thousands of dollars and Pokemon TCG boxes selling for thousands. As the games continue to grow in popularity among collectors, the prices of the cards will also climb, even for the McDonald's collectible cards sold in Happy Meals. This article has been updated with current prices as they continue to inflate. Miscut and misprinted items are still the highest value of the McDonald's 25th-anniversary cards, with the holo Pikachu in second.

Pokemon TCG in the News

Recent months have seen YouTubers, influencers, Twitch streamers, and even average fans going all-out on purchasing Pokemon cards, spending upwards of thousands of dollars for Pokemon Trading Card Game (TCG) booster boxes, and in some cases, just as much for a single card. The monster-catching franchise's 25th anniversary has brought along with it a virtual concert with Post Malone, new game announcements, and a plethora of commemorative merchandise, but by far the most viral part of the celebration has been Pokemon's collaboration with McDonald's.

The History of Pokemon Cards and Happy Meals

Alongside the franchise's monumental anniversary, The Pokemon Company has partnered with McDonald's to bring children and Pokemon fans alike Pokemon-themed Happy Meals from February to March. Each Happy Meal includes the standard Happy Meal food of choice, a Pikachu-themed Happy Meal box, and a mini booster card pack of 4 Pokemon TCG cards. Happy Meal also include a mini picture frame, deck box, or sticker sheets. Unsurprisingly, the limited-time Pokemon cards have skyrocketed in both popularity and price, and while each card has the same likelihood of appearing in a pack, here are the hardest to find McDonald's Pokemon cards.

As with most any other set of Pokemon TCG cards, misprints and error cards tend to be both the rarest and most valuable cards on the third-party reselling market. One McDonald's customer sold an error Pikachu card just last week for about $500. While the holographic cards in the 2021 McDonald's promotional set are the ones fans have been on the lookout for, this one, in particular, was non-holographic, showing just how much some collectors value error cards.

RELATED: The PS5 and McDonald's Pokemon Cards Have Something in Common, And It's Not Good

After iconic Pokemon like Pikachu and Charizard, it goes without saying that the Kanto region starters are likely some of the most recognizable monsters out there. Bulbasaur, Charmander, and Squirtle made their Pokemon debut alongside Pikachu back in 1996, and have since remained some of the favorite monsters of long-time fans, particularly those who grew up playing the original Pokemon games on the Game Boy. These are the second-rarest cards from the 2021 McDonald's promotion.

This particular Bulbasaur card featuring the classic Grass-type starter Pokemon was originally released as part of the Shining Legends Pokemon TCG expansion back in 2017. In 2019, the card appeared in General Mills Let's Go, Kanto! Mini Packs found in General Mills cereal boxes exclusively at Walmart. The card was also part of a McDonald's promotion in France in 2019, also with holographic and non-holographic variations.

This Charmander card was originally released in the Burning Shadows Pokemon TCG expansion in 2017. The card has appeared in a variety of promotions in Japan, like the ones at 7-Eleven, FamilyMart, and Lawson. This Charmander also appeared outside of Japan in a 2019 French McDonald's promotion, as well as in the Charizard-GX Premium Collection and Deck overseas.

Finally, this Squirtle card featuring the Water-type starter Pokemon originally appeared in 2019's Unbroken Bonds Pokemon TCG expansion. Since then, this card was included in the Blastoise-GX Premium Collection released in 2019, and was later reprinted in the Japanese Tag All-StarsPokemon TCG subset in the same year.

Like the other cards in this year's McDonald's set, this Squirtle card includes the Pokemon 25th-anniversary logo and unique set icon, and its holographic variant is about as hard to find online as the holographic Bulbasaur and Charmander cards. The Unbroken Bonds Squirtle goes for anywhere from $6-80 depending on its condition and/or holographic iteration, while the McDonald's non-holographic Squirtle resells for $3-10, and the holographic version for $12-20.

Of course, without the Pikachu, Bulbasaur, Charmander, and Squirtle cards, plus their variants, there are still 42 other cards left in the set. These include the rest of the starter Pokemon from previous generations: Chikortia, Cyndaquil, Totodile, Treecko, Torchic, Mudkip, Turtwig, Chimchar, Piplup, Snivy, Tepig, Oshawott, Chespin, Fennekin, Froakie, Rowlett, Litten, Popplio, Grookey, Sobble, and Scorbunny. Each of these cards are readily accessible via third-party reselling sites, and each card's non-holographic version resells for around $2-5, while each holographic card goes for around $6-10.

The Pokemon TCG 25th anniversary cards are available with the purchase of a McDonald's Happy Meal for a limited time.

MORE: Will the McDonald's Pokemon Cards Be Worth A Lot of Money One Day?

Comic Storylines Insomniac Can Use in Marvel's Spider-Man 2

Marvel's Spider-Man 2 is confirmed to be in development, and there are plenty of classic comic storylines from which the title can draw inspiration.

McDonald’s Pokemon Cards Are Now Worth $200 And More 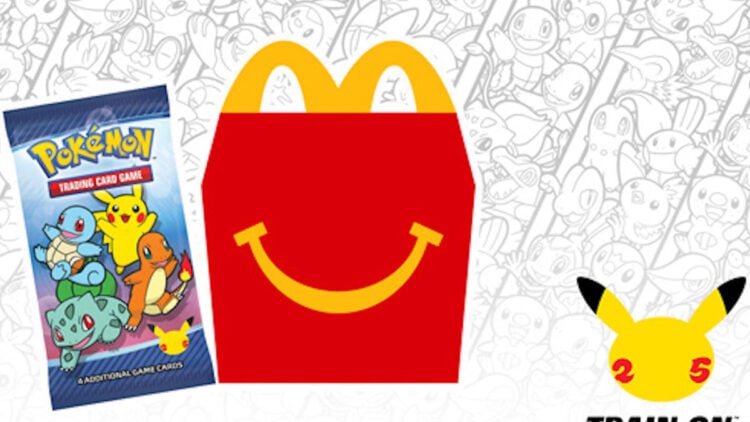 In recent years, resellers have gone crazy over the limited editions bundled with Happy Meals. And this has never been more evident than in the world of McDonald’s Pokemon cards.

Things that seem worthless to most people, sometimes have a high stock value on the resale market. For example, Happy Meal Beanie Babies remain a hot commodity today.

And don’t forget when the Rick and Morty collaboration added Szechuan sauce to the menu for one day, actual violence ensued over the counter. The following day, those sauce packs were appearing online for $300.

In recent history, a popular K-Pop group sold a meal with their face attached to it. Included in the box were collectible trading cards and resellers capitalized on this market. Trading cards would sell for $40, roughly a $38 profit from the Happy Meal they were originally bought in.

CHECK OUT: 5 Most Expensive Yu-Gi-Oh! Cards On The Market Right Now

The meals came in a specially designed yellow box with Pikachu’s smiling face on the front that opened to reveal the fixings of a Happy Meal and a future gold mine for any lucky resellers that managed to get their hands on the meal.

CHECK OUT: 8 Most Expensive Rookie Cards Ever – Includes NFL, NBA, MLB, and NHL

Where The High Values Came From?

It started with resellers camping out all night for the cards, so McDonald’s employees put a one-per-customer limit on the Happy Meals in order to stave off any violence should the first person in line buy everything in stock and leave everyone tired, hungry, and cardless:

But by allowing everyone a buy-in for the market, trades could be made. Value has since gone up by taking into account the sentimental value of the Pokemon, the look of the card, and the leveraging power each collector had with their own hand of four.

CHECK OUT: 5 Valuable Michael Jordan Basketball Cards That Prove He Is The GOAT

It has almost become an expectation that any time a limited quantity of something is made available to the public, it will pop up on the resale market mere hours later.

And though Pokemon card trading is a long-forgotten pastime, for some resellers it was probably a profitable revisit to their roots.

For now, we wait for the next McDonald’s Happy Meal collectible that will spark rioting in the streets.

As part of a promotion for the Pokémon franchise’s 25th anniversary, The Pokémon Company once again partnered with fast-food giant McDonald’s to distribute cards in Happy Meals until March 8.

Each Happy Meal is supposed to come with a four-card promo pack that features reprinted art of all 24 starter Pokémon and Pikachu with a special 25th-anniversary stamp on the card. In total, there are 50 cards in this limited-edition set because all 25 Pokémon have a holo and non-holo variant.

Just like with every other Happy Meal promotion, customers can purchase the featured items separately, though this policy depends on the individual McDonald’s store and management. This has led to locations being bought out of the cards entirely, leading to scalpers re-selling the limited-edition Pokémon cards online.

Because the cards are a limited-edition run tied into the Pokémon franchise’s 25th anniversary, there is an inherent collectibility factor playing into the price of the cards. Some sealed boxes listed for resale can go for between $600 to $1,000, while individual packs are going up to anywhere from $4 to $20.

Here is a list of average costs for every Pokémon card featured in this McDonald’s 25th anniversary set, listed by generation and with holo and non-holo pricings form current and historic price database, PriceCharting. None of these listings are using PSA graded examples.

There are also four “toys” that are included with the promo packs, a cardboard deck box, a set of 25 stickers for each starter, a cardboard and plastic cardholder, or a set of four larger stickers that will feature a random region’s starter trio and Pikachu.

The woman was on all fours, and the man sat behind. The woman let out a theatrical scream - for a long time she had only imitated the pleasure of being close - and then whispered, barely hiding her disappointment:. No.

And we will rush to where the delightful reigns, nobody and nothing overshadowed the buzz. do you agree, Nikita. Yes or no.

I recalled how he was recently torn to pieces by someone else's penis and finished over and over again, and the excitement did not leave me. I imagined that maybe my wife got pregnant on the train and descended again. We agreed that I would not end up in her, and if she did fly in, then to know from whom.