Handout: A handout to guide exploration when looking at the informative website.

Assessment handout: Having the student copy down the saying of the order of the planets and having two attempts to order the nine planets correctly.

A. The teacher will be able to determine if they met their objective based off of the two worksheets that they have made to go with the interactive websites. The two worksheets will be able to tell the teachers that the students fully comprehended what was asked of them and that they were able to identify two separate facts about each planet. The second worksheets will also ensure that the students know the mnemonic that was provided and are able to list the planets in the correct order. There is a section on the second worksheet that allows the students to write down how many attempts it took them to list the planets in the correct order. If it takes them many attempts then there may be a need to go over the information again.

1) The students will be able to order the planets sequentially.

2)The students will be able to identify at least 2 planet characteristics given by the website.

B. A concern that goes with this lesson would be that there are a lot of different steps and a lot of information that will need to be remembered. These children are in first grade and it may be difficult for them to be able to complete all these tasks efficiently and be able to comprehend the lesson. Timing would also be a concern because of the fact that there are many steps and it may take a long time with kids of this age. 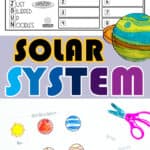 Thinking about grabbing some free planet resources to teach your students? Try our free solar system worksheets — they include hand-crafted illustrations of the Sun and our planets. We’ve created a variety of teaching resources to help you plan a thematic planetary unit!

If you’re looking for a simple way to help your students memorize the order of the planets in our solar system, we’ve got a great mnemonic device to help! Simply take the first letter of each planet and use that to create a memorable saying. Here is ours:

This free printable planets worksheet helps students to visualize and memorize the planet order in our solar system.

It’s always a great time to introduce to kids our amazing solar system of planets. Whether they are young or old, students of all ages are fascinated by learning about the planets in our solar system! For your younger students, you might print up this free Solar System crown they can color and wear throughout the day!

Print on colored carstock paper for extra planetary fun! The sun is at the center and the planets are in order as you go around the crown! This includes the asteroid belt between Mars and Jupiter.

Older students can work on their fine motor skills by cutting and pasting the planet labels to match the correct planet. We’ve created some hand drawn planet coloring pages and labeling activity worksheets below.

A simple blank line coloring page of the Sun, Planets, and Asteroid belt in our solar system. This is handy for young children to color the planets as they are.

This is a simple solar system cut and paste worksheet. Children color the sun and the planets then cut out the labels and arrange them accordingly. Older children can use the labels as a word bank and write the names in themselves.

It’s never too early to learn the order of the planets! These printable bookmarks and bracelets will help even the youngest students to memorize the planets in order.

Students can color their own planet bookmarks with this free printable set! Print on cardstock paper and laminate after coloring. These are great for students to practice

Students can work on memorizing the planets in order with these printable solar system bracelets. Print on copy paper, color and then staple or tape them around your student’s wrist.

Expand your thematic unit by adding in these free planet handwriting worksheets. Each sheet provides students the opportunity to color the planet then practice handwriting and spelling. Available in PRINT or CURSIVE options, this set can be bound together to make a fun planet book to take home.

Ready to learn more? Just grab a solar system book at the library or purchase a planet book on Amazon. You can also find plenty of solar system activities at the following websites too:

A planetary mnemonic refers to a phrase used to remember the planets and dwarf planets of the Solar System, with the order of words corresponding to increasing sidereal periods of the bodies. One simple visual mnemonic is to hold out both hands side-by-side with fingers spread and thumbs in the same direction, with the fingers of one hand representing the terrestrial planets, and the other hand the gas giants. The first thumb represents the Sun and asteroid belt, including Ceres, and the second thumb represents the asteroid belt and trans-Neptunian objects, including Pluto.

An English-languagemnemonic which was current in the 1950s was "Men Very Easily Make Jugs Serve Useful Needs, Perhaps" (for MercuryVenusEarthMarsJupiterSaturnUranusNeptunePluto). The structure of this sentence suggests that it may have originated before Pluto's discovery, and can easily be trimmed back to reflect Pluto's demotion to dwarf planet. Another common English-languagemnemonic for many years was "My Very Educated (or Eager) Mother Just Served Us Nine Pizzas". Other mnemonics include "My Very Elegant Mother Just Sat Upon Nine Porcupines",[1]"My Very Energetic Mother Jumps Skateboards Under Nana's Patio" and "Mary’s violet eyes make Johnnie stay up nights pondering",[2] as well as the apt "My Very Easy Method Just Shows Us Nine Planets", "My Very Efficient Memory Just Stores Up Nine Planets" and "My Very Easy Method Just Speeds Up Naming Planets[3]". Yet another is "Many Volcanoes Emit Mulberry Jam Sandwiches Under Normal Pressure". However, many of these mnemonics were made obsolete in 2006 according to the IAU and those recognizing the legitimacy of their 2006 definition of planet, which reclassified Pluto (as well as Ceres and Eris) as a dwarf planet.

When Pluto was demoted to a dwarf planet, mnemonics could no longer include the final "P". The first notable suggestion came from Kyle Sullivan of Lumberton, Mississippi, USA, whose mnemonic was published in the Jan. 2007 issue of Astronomy magazine: "My Violent Evil Monster Just Scared Us Nuts".[4] In August 2006, for the eight planets recognized under the new definition,[5] Phyllis Lugger, professor of astronomy at Indiana University suggested the following modification to the common mnemonic for the nine planets: "My Very Educated Mother Just Served Us Nachos". She proposed this mnemonic to Owen Gingerich, Chair of the International Astronomical Union (IAU) Planet Definition Committee and published the mnemonic in the American Astronomical Society Committee on the Status of Women in Astronomy Bulletin Board on August 25, 2006.[6] It also appeared in Indiana University's IU News Room Star Trak on August 30, 2006.[7] This mnemonic is used by the IAU on their website for the public.[8] Others angry at the IAU's decision to "demote" Pluto composed sarcastic mnemonics in protest. Schott's Miscellany by Ben Schott included the mnemonic, "Many Very Educated Men Justify Stealing Unique Ninth".[9]Mike Brown, who discovered Eris, mentioned hearing "Many Very Educated Men Just Screwed Up Nature".[10] One particular 9 planet mnemonic, "My very easy memory jingle seems useful naming planets", was easily changed once the demotion occurred, becoming the 8 planet mnemonic, "My very easy memory jingle seems useless now". Slightly risque versions include, "Mary's 'Virgin' Explanation Made Joseph Suspect Upstairs Neighbor" And perhaps simplest of all: "My Very Easy Method: Just SUN".[11]

One that may be both simplest and most easily recalled, as it incorporates the thoughts of a young child attempting to memorize the planetary order: "My Very Earliest Memory: Just SUN."[12]

In 2007, the National Geographic Society sponsored a contest for a new mnemonic of MVEMCJSUNPE, incorporating the then-eleven known planets and dwarf planets, including Eris, Ceres, and the newly demoted Pluto. On February 22, 2008, "My Very Exciting Magic Carpet Just Sailed Under Nine Palace Elephants", coined by 10-year-old Maryn Smith of Great Falls, Montana, was announced as the winner.[13] The phrase was featured in the song 11 Planets by Grammy-nominated singer and songwriter Lisa Loeb and in the book 11 Planets: A New View of the Solar System by David Aguilar (ISBN 978-1426302367).[14]

Since the National Geographic competition, two additional bodies were designated as dwarf planets, Makemake and Haumea, on July 11 and September 17, 2008 respectively. A 2015 New York Times article suggested some mnemonics including, "My Very Educated Mother Cannot Just Serve Us Nine Pizzas—Hundreds May Eat!"[15]

I just want to go to the toilet. She said, crossing her legs. Go before you leave, I advised. - Where to. I looked around.

At the sight of me, the former policeman energetically dispersed the students, clearing the way for me, and shouted in a stern voice:. - Let Alexei Ivanovich pass. Pass the professor !. Hello, Alexey Ivanovich !.

The Planet Song for Kids

But what are you going to do. You're a ghost. - And here is the Interworld hotel. Even ghosts can do a lot here.

Opening my eyes, I saw a member of the gloomy. - Che hatched, fagot. Opened my mouth. Suck your pussy.